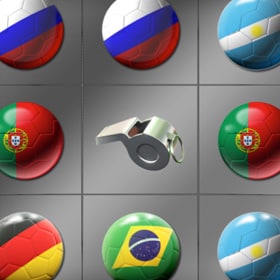 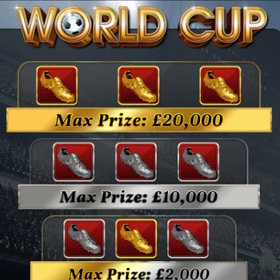 An original scratch card game with a fun football theme. It’s true to say that ‘World Cup’ is not the most innovative game online. Nevertheless, I did enjoy it.

Bend it like Beckham and hit the back of the net with the ‘World Cup’ Scratch Card from Betfred. This game combines two of my favourite hobbies, Football and winning money! Don’t forget, you can also get a Stake welcome offer.

To play this game, you’ll need to head over to Betfred online. Sign up and check out the ‘Lotto’ section of their website. In the ‘Lotto’ area you’ll find lots of fabulous scratch card games, including the ‘World Cup’ card.

The game loads and a conventional scratch card layout is presented to the player. It’s worth pointing out that ‘World Cup’ is a very traditional type of game. You have nine panels to scratch away, if you reveal three matching symbols you’ll win a cash prize.

Different footballing countries represent the symbols you need to match. We have top-class footballing cheats Argentina, the clinically efficient Germans, Pompous Portugal, the brilliantly creative Brazilians and of course – the magnificent old England. Oh, and for some reason – Russia.

The only other symbols are the referee’s whistle – this awards a free-kick and the boot icon, three golden boot symbols unlock the jackpot prize.

So how much can you win playing ‘World Cup’ scratch? Well, the top award is almost worth as much a week’s wages for a Premier League player. Depending on the amount you wager, the jackpot rises or falls, like West Ham United’s season. If you stake the minimum amount (20p) the maximum prize is £2000. However, raise your stake to £2, and you could win £20,000. Now, if you play for the maximum stakes (£25) the jackpot increases to £250,000.

The World Cup card includes one bonus game; you access the bonus round by matching three boots. Once in the bonus feature, you pick a National team to represent you in the World Cup. You win cash when your team scores goals in a virtual tournament.

In summary, this is an original scratch card game with a fun football theme. It’s true to say that ‘World Cup’ is not the most innovative game online. Nevertheless, I did enjoy it. Obviously, it will appeal to soccer fans, but anyone who likes traditional scratch cards will also get a kick from this card.

Betfred is a great place to play cash games. New players get a mixture of promo deals, plus you have the security of dealing with one of the biggest brand names in online cash gaming.