To my surprise, answering the question ‘Who owns the national lottery?’ is more complicated than I imagined. Having set myself the challenge of writing a quick article about the topic, I expected to finish the piece in around one hour. Instead, I found myself down the ‘research rabbit hole’ for hours, sifting through corporate structures, government departments and foreign pension funds.

After serval hours of digging, I finally got to the bottom of the mystery surrounding the ownership of Britain’s best-known gambling brand.

It’s true, Canadian school teachers own our Lotto! How did these eggheads end up owning Britain’s ‘State’ Lottery? As I said earlier, it’s complicated. However, I will try to explain the ownership structure of the National Lottery below.

HOW IT ALL BEGAN

It was the Conservative government under John Major which set up the UK’s first state-franchised Lottery in 1994. The aim was to raise money for good causes and to generate additional revenue for the government coffers.

Rather than a state-run enterprise, the Lottery was to be delivered by a private company under license. The organisation that won the bidding process to deliver the British Lottery was a consortium that included the following companies: ICL, Cadbury Schweppes, De La Rue and GTECH. The consortium became known as The Camelot Group.

The consortium was issued with a license to operate the Lottery from 1994. The first numbers were drawn on the 19th November 1994, and the game proved a huge success.

In 2000, when the franchise came up for tender, British businessman Richard Branson submitted a rival bid to take over the game from the Camelot group. He promised to run the Lottery on a not-for-profit basis, returning all money to good causes.

However, his effort failed, and Camelot was once again awarded the Franchise amid much controversy and legal wrangling.

In early 2009 the process of awarding the Franchise for another ten years began. Camelot once again won the rights to run the lottery, securing the consortium’s control on the game for the next decade, with the option to extend for a further five years.

Effectively, the Camelot Group had been given a license to print money for fifteen years. Of course, it wasn’t long before institutional investors began sniffing around. One fund which became interested in acquiring Camelot (and the British Lottery) was the Ontario Teachers’ Pension Plan.

The OTPP is the largest occupational retirement scheme in Canada and one of the country’s largest institutional investors, reporting assets of $205bn (CAD). In 2010 the fund snapped up Camelot for just under £400m.

Pension funds usually operate on a hands-off basis. The OTPP ownership of the Lottery did not affect the day-to-day running of the game. In fact, most people were unaware it had been sold-off and the Camelot Group continued to operate UK Lottery games and Scratch Cards. 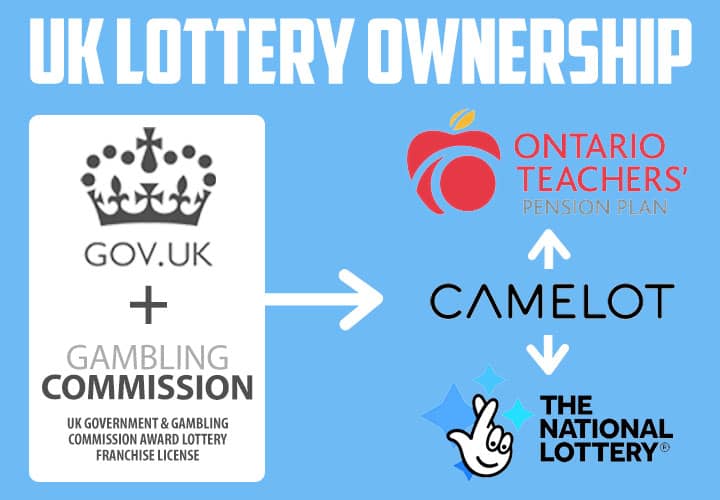 DOES THE ONTARIO TEACHERS’ PENSION OWN THE LOTTERY?

Well, not really! They own the company (CAMELOT GROUP PLC) which is LICENSED to run the UK Lottery. Ultimate control of the UK National Lottery still resides with the UK Government and the UK Gambling Commission.

The Gambling Commission has the power to award the license to another company or consortium, under a defined legal process. When the current agreement expires in 2023, there’s no guarantee Camelot will be granted another ten-year license.

At this point, you might be asking ‘Doesn’t that make the £400 million paid by the OTTP for Camelot worthless?’ Ummm, maybe.

If Camelot fails to secure the franchise in 2023, it will undoubtedly affect profits. Nevertheless, Camelot’s value is not wholly based on providing the UK lottery game.

The group has financial interests in multiple international lotteries. In October 2013, Premier Lotteries Ireland, a consortium including the Camelot Group and the Irish Post Office ‘An Post’, won the licence to run Ireland’s Lottery for the next 26 years.

In 2018, Camelot added the Illinois State Lottery to their portfolio – if the group can continue to win licenses abroad it will less reliant on the UK market.

SO WHO REALLY OWNS THE UK LOTTERY?

The short answer is… IT COULD BE YOU! If you’re a British citizen, then your government owns the Lottery on your behalf. Don’t like the owners? vote them out! If you do, buy a scratch card or a lotto ticket and help out a good cause.